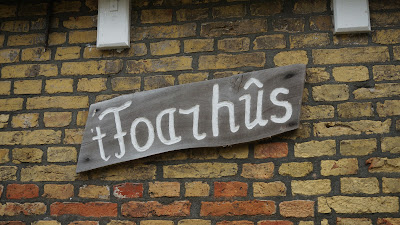 This post is from a question that came up on the Fun With Frisian Facebook group. To start off the year, let's look into contractions in Frisian. What do all those 't and 'e abbreviations mean? We'll try to find out.

I'll be referencing Pieter Meijes Tiersma's (R.I.P.) excellent "Frisian Reference Grammar" for major parts of this lesson. The book is out of print and often unreasonably priced, but if you check a site like addall.com periodically, sooner or later you might find a copy for under $50 (it's a thin paperback of 157 pages including the index).

't - sometimes, this is a reduced form of the pronoun it meaning "it," which is normally pronounced with a schwa in Frisian [UHT], but can be shortened. For example: 't wie in lange dei - it was a long day. And another example:

Frisian has two definite articles where English has only "the": de and it. Both are said with a schwa in Frisian: [DUH] and [UHT]. On the bright side, Frisian is not as complex as German this way, but it is still more work than English. All plural nouns take de where we'd use "the." However, singular Frisian nouns vary between it and de:

't - the 't contraction also shows up a lot after other words, often as a shortening of dat which means "that" and is normally pronounced like English "dot." [DAWT]

in dream dy't útkomt
a dream which has come true

wa't ik bin
who I am

Generally, when you see -'t as an ending, look to the main word to get the meaning:

Now, onward to the shortened form for de, the other singular "the" in Frisian.

'e - shows up after the very common prepositions yn, op, and om.

yn 'e wei
in the way

oan 'e kant
to the side

'e - certain phrases involving hûs (house), which normally would be it hûs.

Wy hawwe der net ien sa'n by.
We have only one such as that.

-sto - shortened forms with the informal you, do, said like the English word "doe" the female deer. Despite the spelling, you still hear do.

Of course, there are many other contractions in Frisian. You will get more and more used to them as you read the language. Hopefully, this article has demystified a few of the more prevalent Frisian contractions.

Posted by OrderInTheQuartz at 12:23 PM No comments: