The End Of Every Journey Is The Path Back Again...

After nearly seven years, I feel that it is time to step away from this blog. Honestly, I have run out of steam, especially for creating longer articles. I will leave the articles here for reference. Note: they are still copyrighted. Ask me first if you want to republish them somewhere. Thanks.

From now on, I will be posting exclusively to the Fun With Frisian Facebook Page. Hopefully, you should be able to read those posts even without joining Facebook by scrolling down and clicking "Not Now" when it asks for a log-in.

I am grateful to everyone who has read this blog over these many years and to all those who love Frisian! 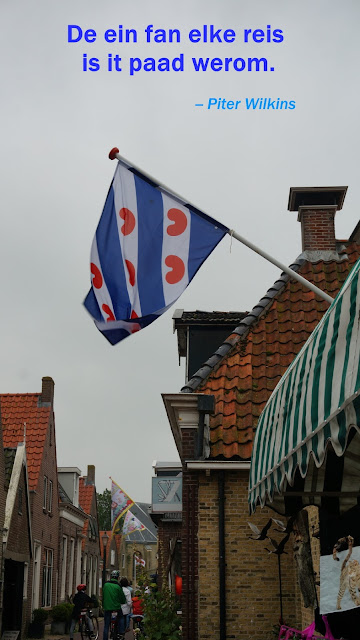 Posted by OrderInTheQuartz at 4:44 PM No comments:

A wallpaper background made from a NASA public-domain image with a Frisian-language poem by Pieter Jelles Troelstra. Right-click and open in a new tab to get the full-size version, which of course you are welcome to download.

Star after star shines like a friend in the sky;

As the daylight sinks, see, they're there again;
The dark of night lies over land and water;
Look, then the starlight beckons joyfully above.

Posted by OrderInTheQuartz at 5:19 AM No comments:

It surprises me! (literally, "it comes to me over the meadow")

This phrase translates as "it takes me by surprise" or "it overtakes or overwhelms me." You'll see it a lot in the past tense too, e.g., Dat kaam my oer 't mad. [dAWt kAWm MIGH OOrt mAWt]

The word mêd or mad means "meadow" in English. It also signifies an old measurement for as much land as one can harvest by scythe in a single day. More figuratively, it can mean “territory” or “terrain." Mêd can also mean "a medium" in the context of art.

Just to get in a bit more vocabulary, the Frisian for "scythe" is seine. Pronounce it like it contains the word "sign." [SIGH-nuh]. The word seine also means a "blessing," both the sort given with hand signals or in the more general sense.

Posted by OrderInTheQuartz at 8:34 AM No comments:

Grab a cup of coffee. This one is going to get intense.

Someone recently asked a great question about oer versus oan in Frisian. On their face, these two little prepositions start off simply enough:

Oer literally translates as "over." Pronounce it with the long "oo" in "moon" and with a slight schwa before the final -r. [OOuhr]

Oan literally translates as "on." pronounce it with the "oh" in boat and a with a slight schwa before the final -n. [OHuhn]

Before we go any further, here is a quote directly from Pieter Tiersma's "Frisian Reference Grammar" (p. 94): "Prepositions often have a wide variety of meanings which are difficult to categorize succinctly." That's something of an understatement! Today, I'm going to look at some more subtle uses of oer and oan and share a visceral hunch about the differences in use... but remember that I'm not a native speaker. This post gets very esoteric and subjective and may not turn out to be especially useful to others studying the language! O.K., disclaimer over. Now...

Let's start with oer and some examples from Tiersma's book, as I think these just may get to the heart of the matter. We can say oer de brêge ("over the bridge") the same way we'd use that phrase in English, and we can also say someone is talking about a subject: hy prate oer syn bernetiid ("he talks about his childhood"). But the question is, why use oer specifically here?

Tiersma notes another meaning of oer that might subtly be of assistance: oer in oere means "in an hour/within an hour." Notice that our first, most literal translation ("over") is no longer helpful. Here is another example from his book: foar de tsjerke oer meaning "in front of the church." Again, why oer specifically?

This is just my personal theory, a feeling I got from looking through phrases. When you think of a church, the building often has a definite yard, sometimes marked by a very solid brick fence. There is a certain "inside consecrated grounds" vibe to it. My suspicion is that oer in its more subtle forms is a bit, well, "grabby" and "possessive"--to try to quantify a feeling. With some subtle uses of oer, the subject is very definitely within its purview. Here's another example to try to get at this visceral sense: mei in boat oerhelje, meaning to bring to the other side by boat. Those involved are landing on and becoming a part of the other shore. From Tiersma again: hja helle my oer om op de FNP te stimmen... "she convinced me to vote for the Frisian National Party." The "om ___ te___" is a clause, so don't worry about it too much here... but the sentence itself shows that feeling of oer taking something or someone into its grasp.

Some subtle variations of oan, on the other hand, do not quite have that "keeping things within its clutches" feel... there seems to be more of a "touching upon" or flowing vibe to it. Again, these are very esoteric impressions! I warned you, right?

...oan te sjen... "look at"... looking at something does not take it into your grasp. But when we talk about a subject, prate oer, perhaps we can say that we are drawing a perimeter about it. We are holding and grasping onto a topic while we speak of it.

Dêr't neat fan oan is, komt ek gjin praat fan - loosely, if you don't give hints or indications about something, no one can talk about it.

Ik bin no wol oan kofje ta! - "I really need coffee now!" Another understatement after this lesson. A more word-for-word translation would look like: "I am now really on coffee!" That ta at the end was a whole other lesson. But with the oan, there's that sense of flowing and movement... not of having something within grasp as of yet.


Posted by OrderInTheQuartz at 2:47 PM No comments:

Art With Frisian-Language Quote From The Little Prince 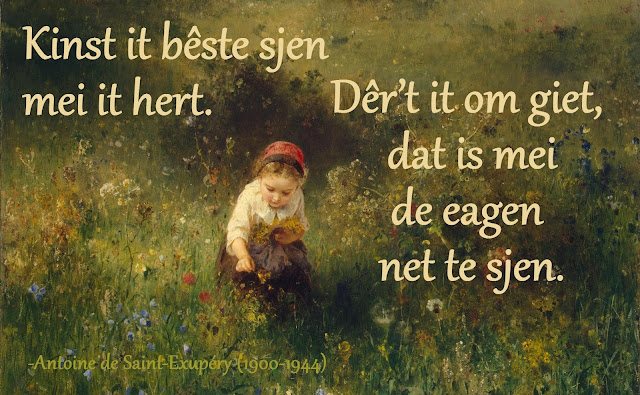 "You can see the best with the heart. That which is essential may not be seen with the eyes."

Quote from the Frisian translation of "The Little Prince" (De Lytse Prins) and painting by Ludwig Knaus (1829 –1910). I made this with Paint.NET software.

Posted by OrderInTheQuartz at 2:08 PM No comments:

Drûgje, alternatively spelled droegje, is the verb for "to dry." The first spelling with the -û- is the more up-to-date one. It is pronounced with the long "oo" sound in "drew." Meanwhile, drûch is the word for "dry," such as with dry weather.


One of my favorite Frisian proverbs involves this verb:

They both literally mean that the one who fishes by night must dry nets by day, or that there are consequences to actions... e.g., stay up late and feel it the next day.

Posted by OrderInTheQuartz at 11:46 AM No comments:

A quick little post. I thought I'd share a picture I made a while back with a good Frisian patriotic phrase:

This phrase is in the Frisian provincial anthem, De Alde Friezen. The picture is one I took at the Imaginarium Festival in Tytsjerk. 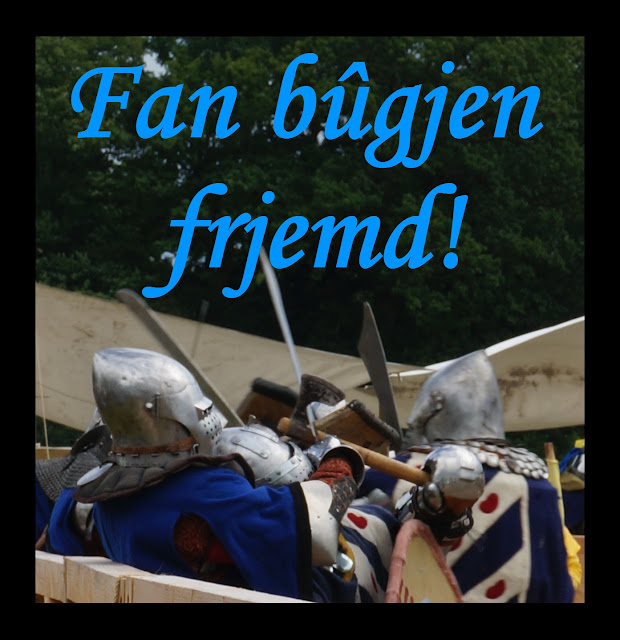 Posted by OrderInTheQuartz at 6:11 AM No comments:

I recently learned a new Frisian word just in time for all the renewed interest in Marie Kondo... opromje, which means "to clean up" or "to tidy up."

It's interesting to me, as an English-speaker, how the word has a connection to the root rom ("space," "vastness," "roomy"), a connection which we don't have in our own language.

Another word where we can see that bond is ferromming, meaning "relief," "solace," or "expansion." This makes so much sense: when something is a relief, it gives you a renewed feeling of space and freedom!

Rom roughly rhymes with "bomb" and is the emphasized syllable in the other words. [fuh-RAWM-ing], [awp-RAWM-yuh].

It is worth adding that rom has another meaning: fame or glory. For example, the provincial anthem describes it Fryske lân fol eare en rom... the Frisian land full of honor and glory.

The verb romje has a number of different meanings. It can mean "to praise" or "to commend." However, it can also mean "to clear out," "to leave," or "to abandon."

To conclude, here is a picture of a beautifully expansive field that I took on a bike ride to Boalsert from Snits: 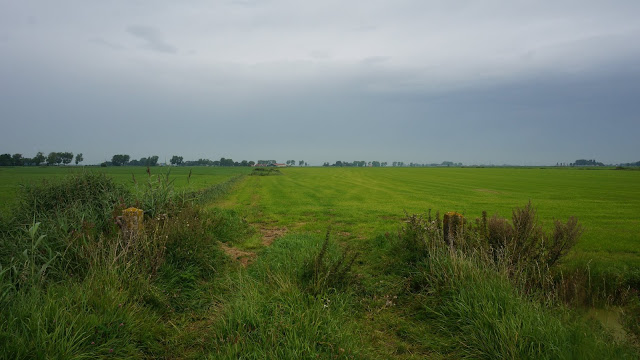 Posted by OrderInTheQuartz at 7:56 AM No comments:

This post is based on a question asked by a member of the Fun With Frisian Facebook Group. The Frisian word ta looks very simple, like a happy cognate to the English "to." It can mean "to" or "towards" just as you would suspect. However, it seems to have another layer or two that might not match up so well with modern English. Ta can mean "closed" or carry the sense of something ending, or only going up to a certain point and no further. It can also imply that something is breaking into pieces or separating.

In another example, we can see the "to" meaning combined with the idea of an ending, a limit, or closing:

The underlying idea of going towards a place, but with a limitation on time or space (there and no further), shows up again here:

He must go to the bathroom.
[EHr NIGH uht HOOS-kuh TAH MWAWT.]

Meshing a bit with the idea of limitation or closing, ta can also sometimes be used to express adversity or as a word of emphasis:

Really think about it!

It is der wol ta kommen.

It's going to take effort.

Of course, sometimes ta means "to" like you'd hope and expect.

To call people to the feast.

...to come to Ljouwert (Leeuwarden) in August.

Posted by OrderInTheQuartz at 12:22 PM No comments: 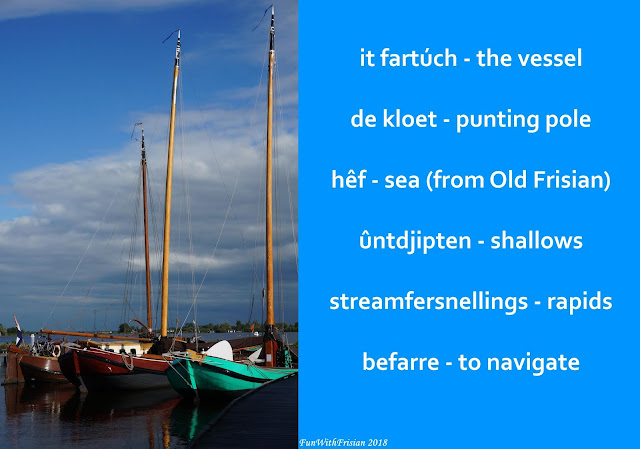 Posted by OrderInTheQuartz at 3:06 PM No comments:

BERINNE - "to achieve" or "to overwhelm"

IT MOAT SYN BERIN HAWWE - it must have its course... it cannot be forced or rushed.
[UHT MAWT SEEN buh-RIHN HAHV-vuh] 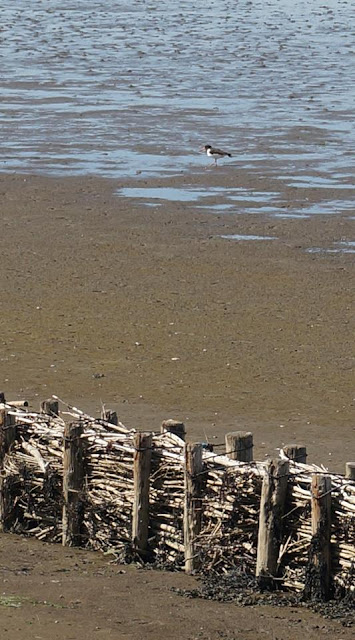 Posted by OrderInTheQuartz at 2:37 PM No comments:

Here's a versatile Frisian verb with connections to an archaic word in English: helje. It can mean to catch, fetch, drag, haul, or realize (a goal). Apparently, in English we once had "hale" as a verb meaning "to drag or draw forcibly." A few examples:

On a related note, the word FANGE means "to catch" and FISKJE specifically means "to fish."

Posted by OrderInTheQuartz at 12:25 PM No comments: